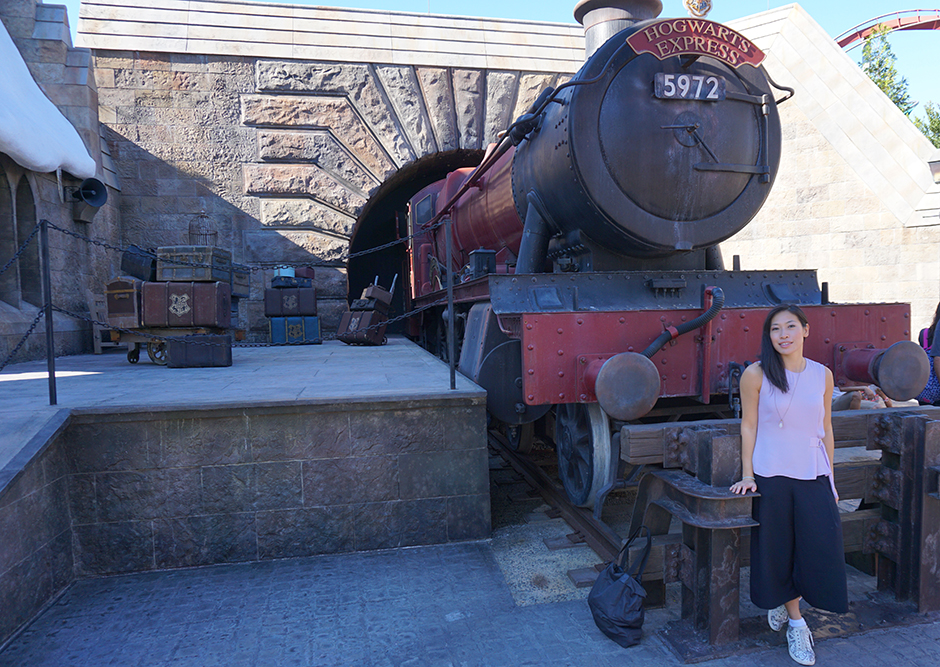 When Tom and I went on our 6 week cross country road trip this winter, I told him that we absolutely had to visit Florida.  I had never been and it seemed like everyone I knew had loved it, so, in the early stages of our trip, we made our way south from Washington, DC and North Carolina into Florida.  The child in me wanted to go to Walt Disney World, but knew I’d be visiting with my family in the near future.  So, after a lot of self control, we decided to forgo Disney World (I know… what was I thinking?!) and got 3-Day passes for both parks at Universal Studios.

I’m going to be completely frank: I really wanted to see the The Wizarding World of Harry Potter.  The only way I’d get to see both Hogsmeade and Diagon Alley was to get passes to both parks, so I did just that.

Universal Studios was actually a lot of fun.  When we got in, I made it my mission to head straight to the Hogsmeade. Prior to my visit, I didn’t see or do any research on The Wizarding World of Harry Potter, so the entire experience was a complete surprise.  I went from being an adult into a child running wild in a candy store. 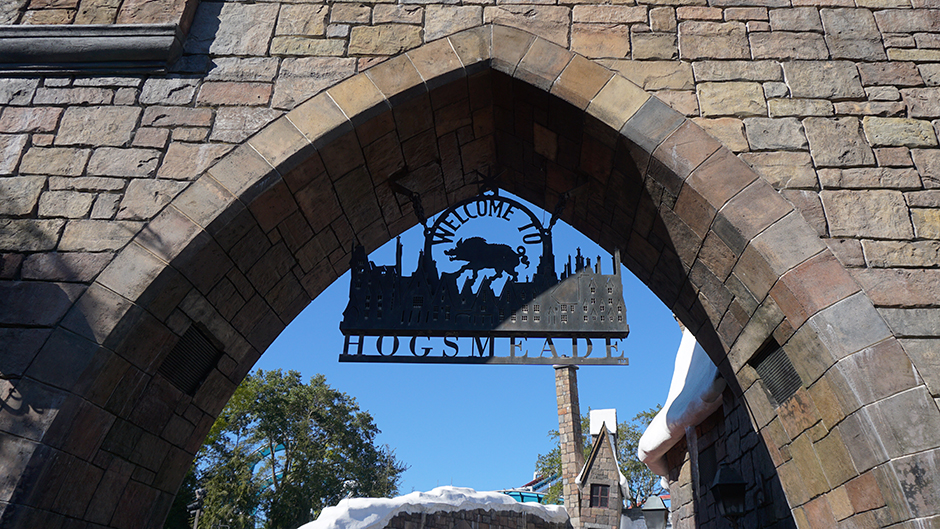 The Experience & The Food

The first thing I did was snap a few pictures and order a cold Butter Beer. I rarely drink soda, but I do enjoy sweet beverages occasionally, so if you love the taste of a float, you’d love this because it was so delicious.  Butter Beer has a thick creaminess like a cream soda float, only with a butterscotch flavored base.  It was surprisingly tasty. 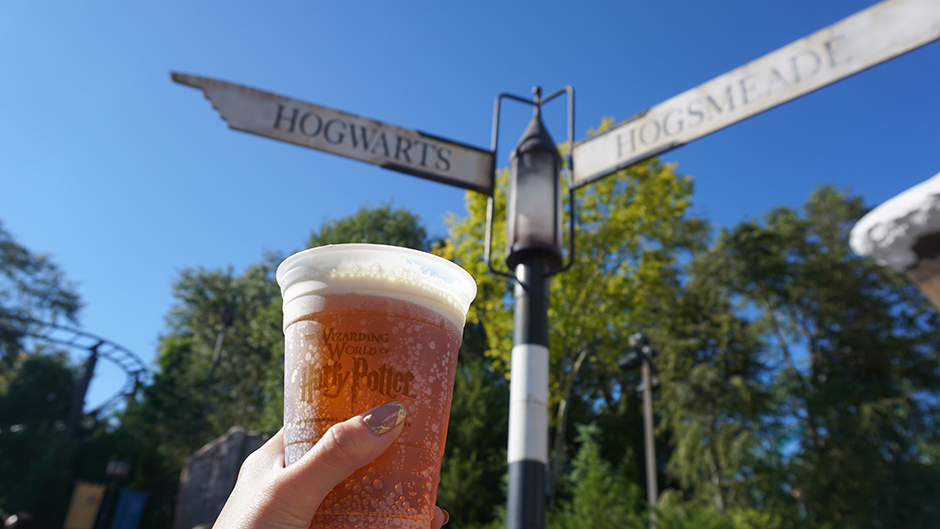 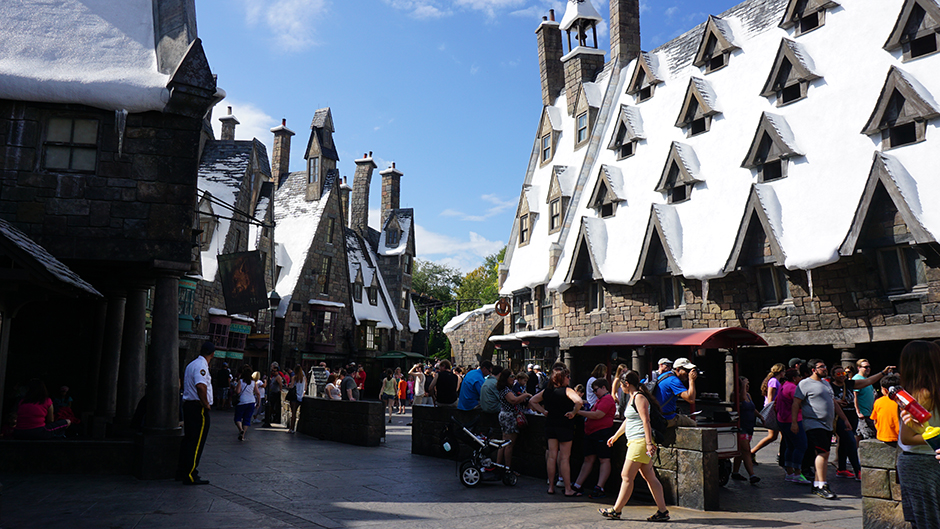 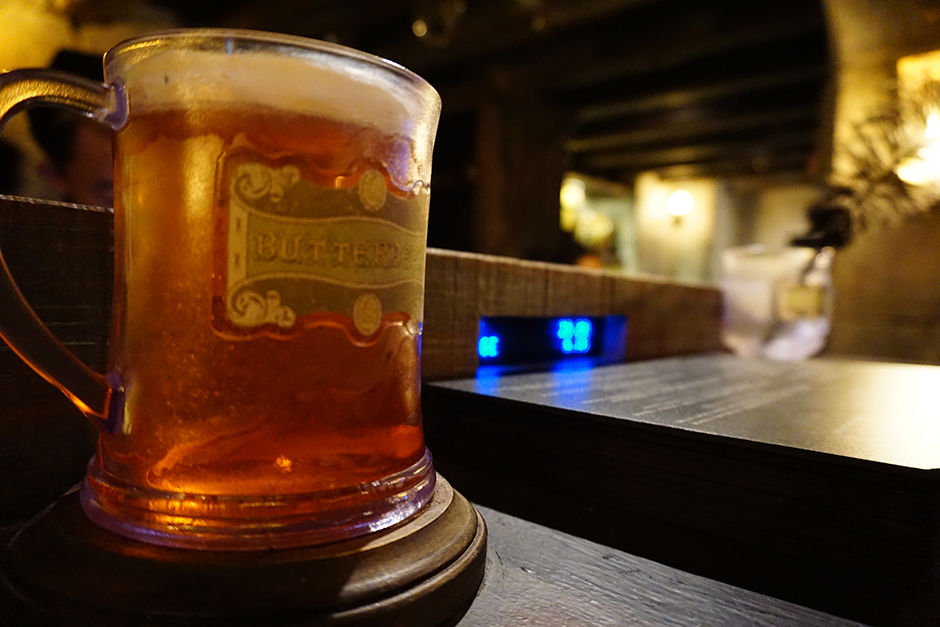 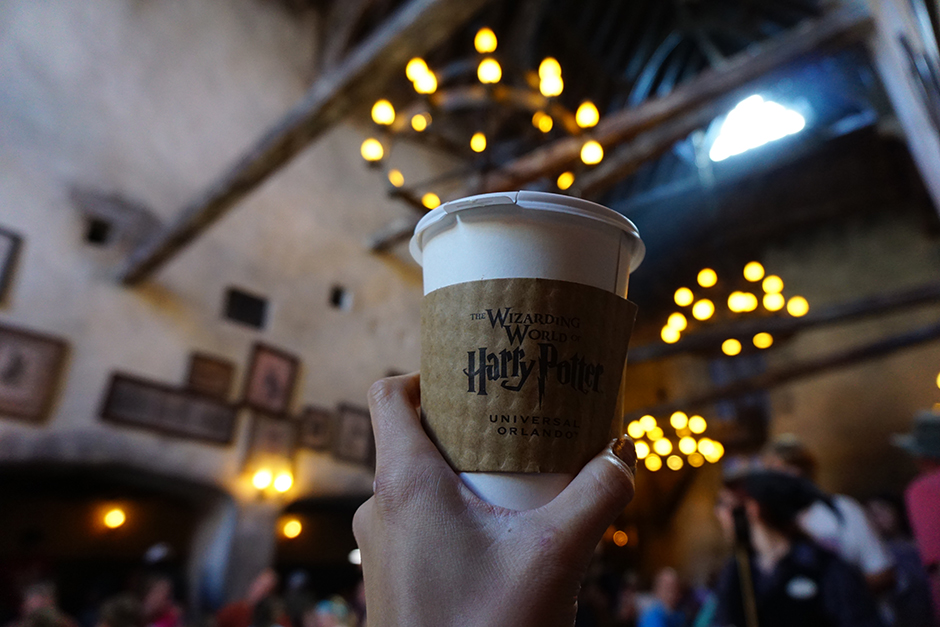 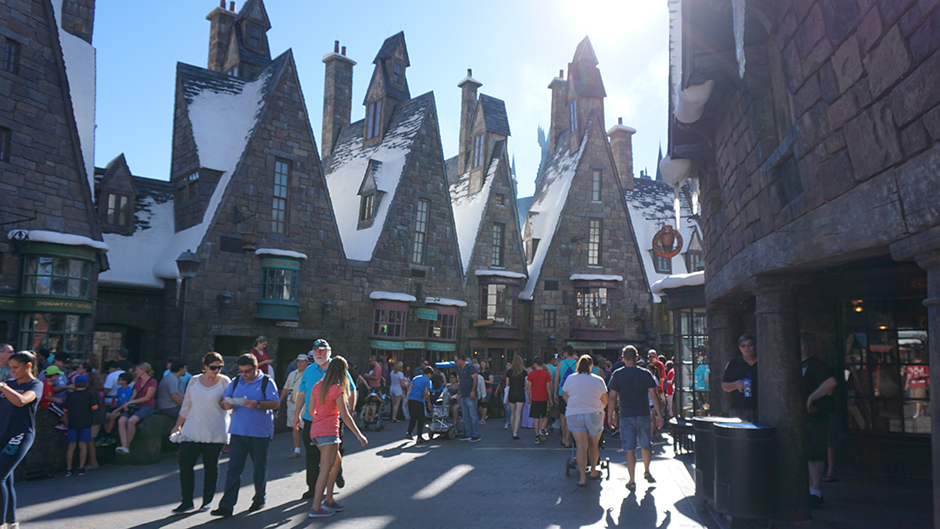 During our 3 days of exploration, we tried the cold, frozen and hot butter beer.  They were all good, but Tom and I both favored the cold one most. It had the right consistency and sweetness to it.  We also tried the butter beer ice cream at the Florean Fortescue ice cream parlor, but there were other great flavors to be had, so I dove right in. 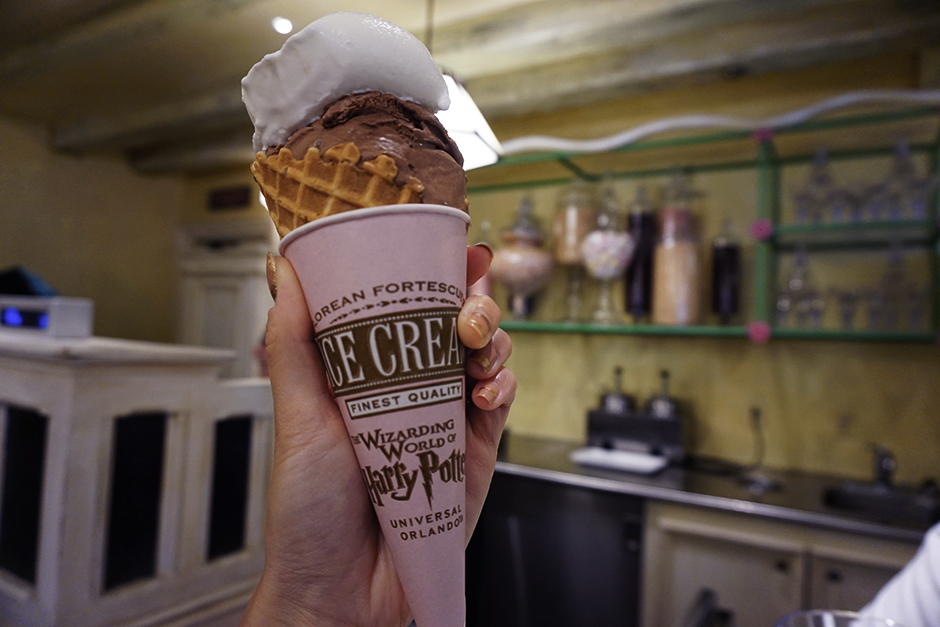 Ice cream is one of my all time favourite foods, so Tom and I enjoyed indulging in a double scoop of waffle cones each day. My favourite combination was the chocolate chili and earl grey lavender. A great balance of sweet, creamy decadence, balanced with the softer earthier flavor of earl grey with a hint of spiciness. I was pleasantly surprised by the quality of the ice cream, so buying 4 scoops (or 2 orders) in waffle cones on my final day didn’t make me feel so bad – don’t judge!  Universal Studios is definitely not short of any sweets.  I went into Honey Dukes to discover a ton of delightful treats from the Harry Potter books. 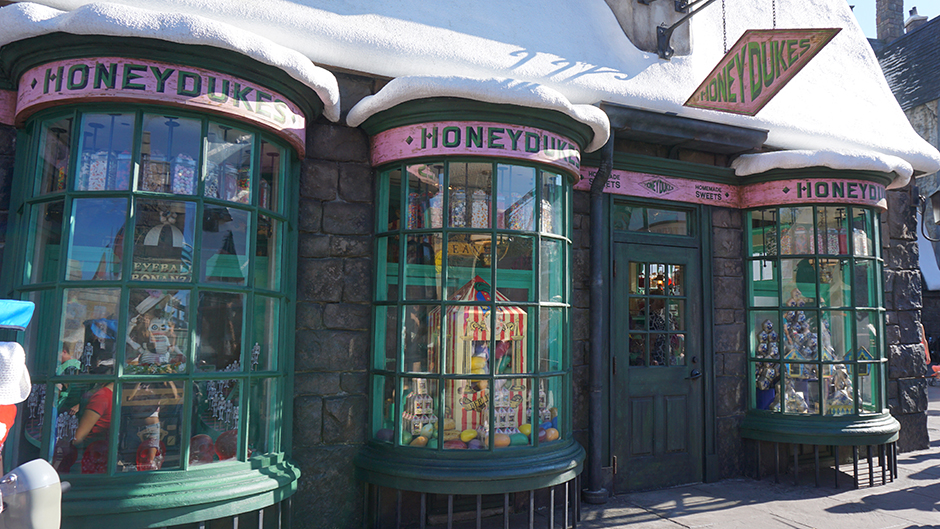 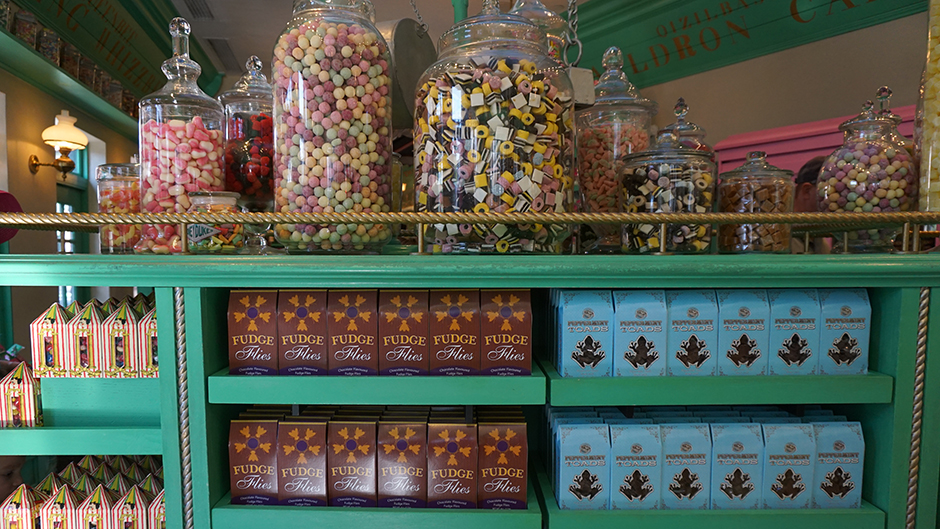 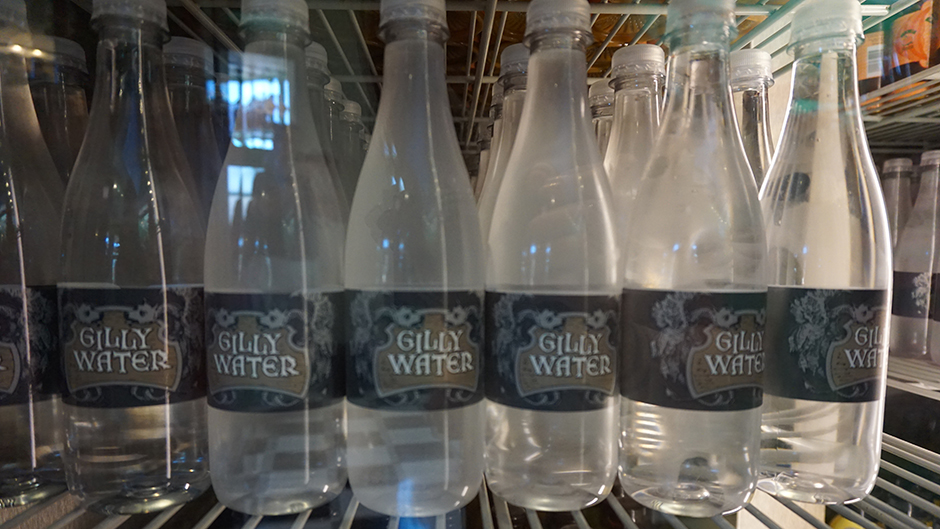 Harry Potter fans could dine in their cafeteria, which feels a little like dining in the actual Diagon Alley, but the food wasn’t great, so it’s great for a butter beer. If you’re planning a visit, you can spend under $15 on a meal easily at most restaurants and stands. 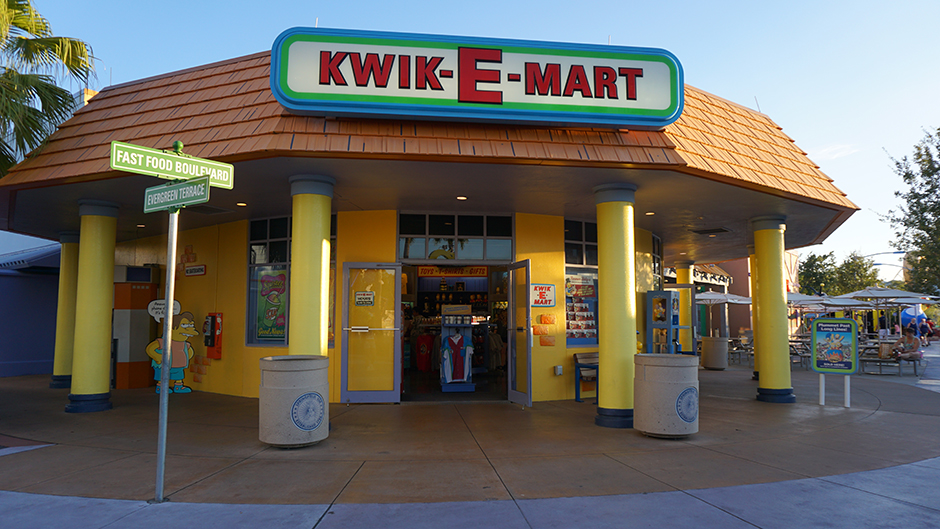 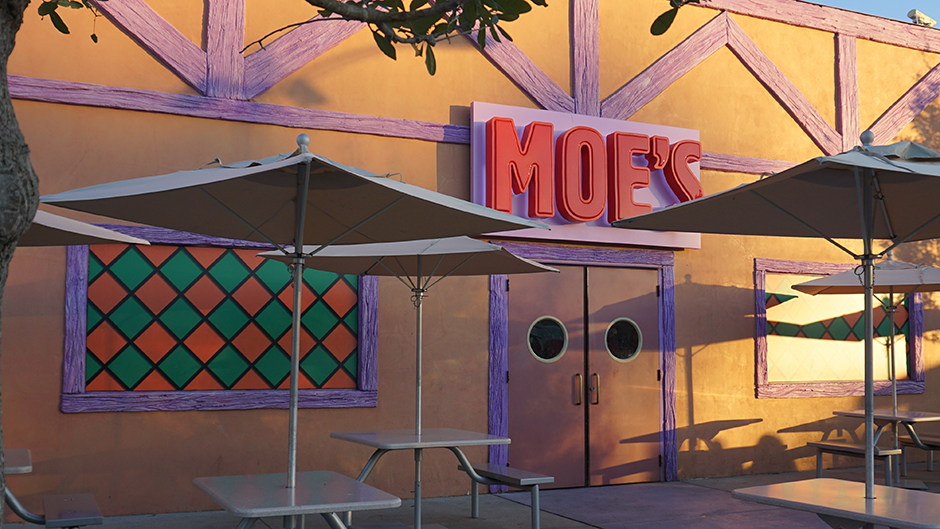 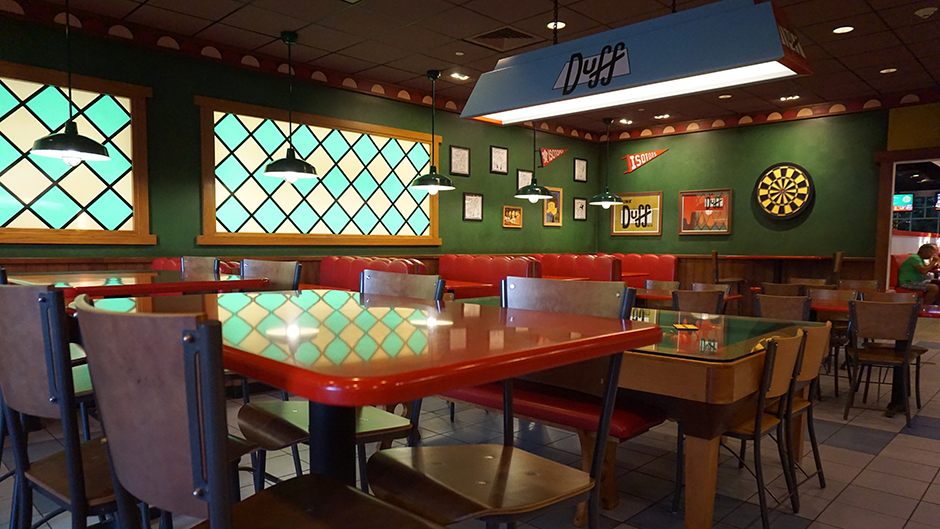 My other less healthier dining experience was choosing to dine at Krusty Burger, which is really just an average burger in a small food court that connected to Moe’s Tavern.  When I saw that there was the Flaming Moe, I just had to have it.  The orange soda over dry ice which reacted thisc cold smoke effect and just looked really awesome.  Anyone who ever watched The Simpsons just needs to get the Flaming Moe. I mean, I was going to only do this once, so why not?

Since I was having a ton of ice cream and butter beer, I spent most of my meals dining on healthier main courses, so I found a spot that served half chicken dinner with veggies.  There are also tons of food options at Universal Studios in Orlando, including like Japanese (sushi), Mexican, Italian, American, even Starbucks at the City Walk (near the entrance of one of the two parks). Some of them even have happy hour, so if you need a midday break from the walk, these are great spots to hit.  Universal Studios closes pretty early (if I recall, before 8pm), so the City Walk just comes alive.  Everyone eats, drinks and parties here afterwards.  If you end up going, visit CowFish for sushi. I would’ve never thought a sushi place with this name would actually be good, but it was.  They have some popular ones, so go with what they recommend and you won’t go wrong. Tom ordered a milkshake which I tried and it was delicious. 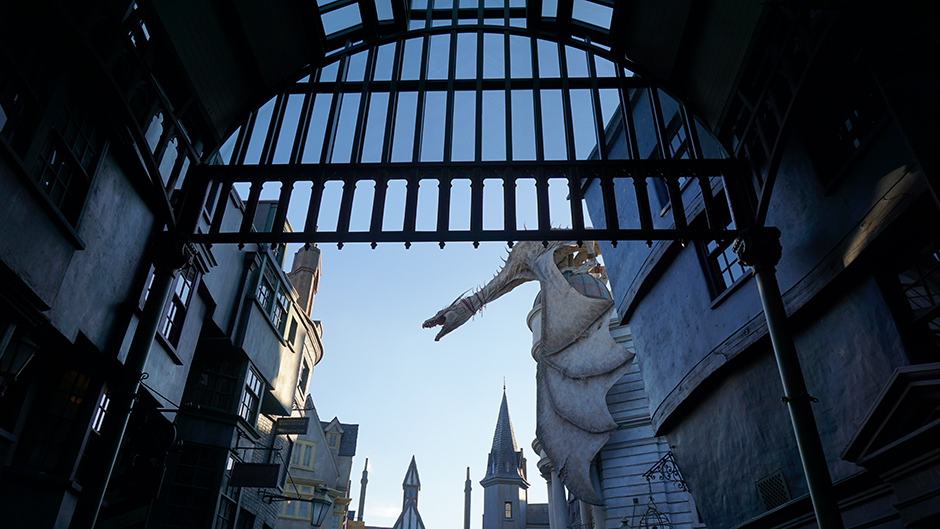 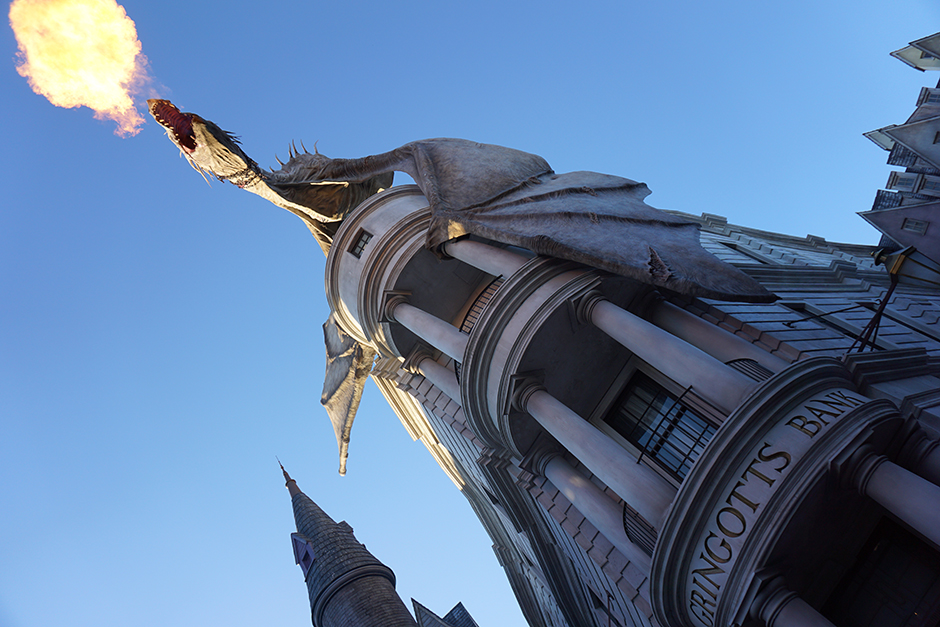 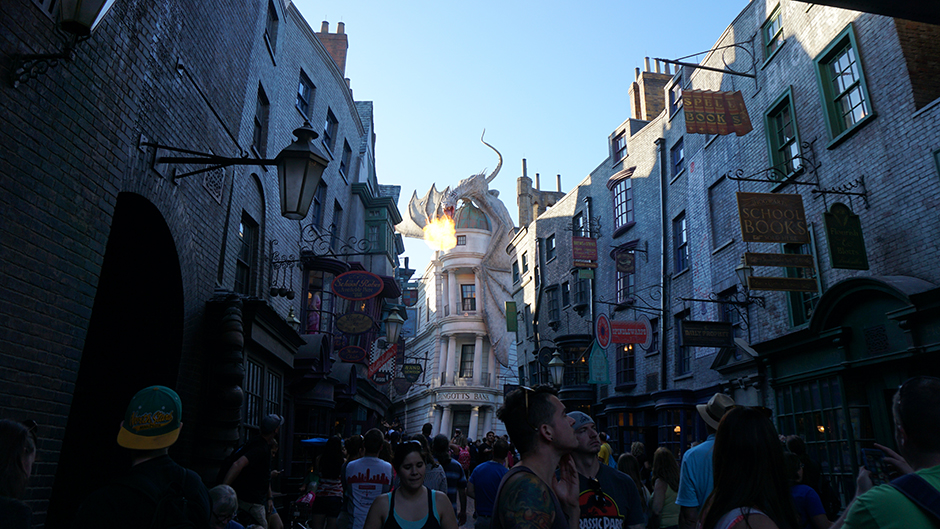 The statue dragon sitting at the top of Gringotts actually screams and breathes fire every few minutes.  Such a cool effect! 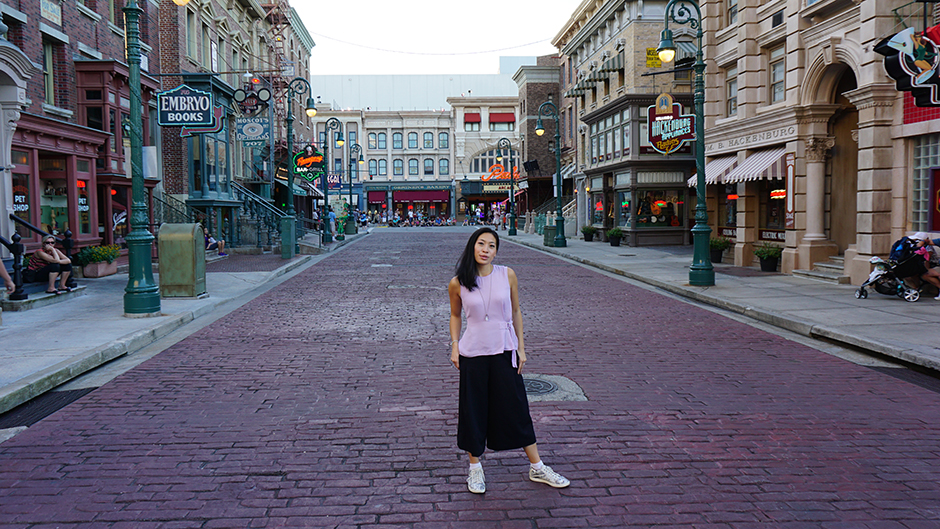 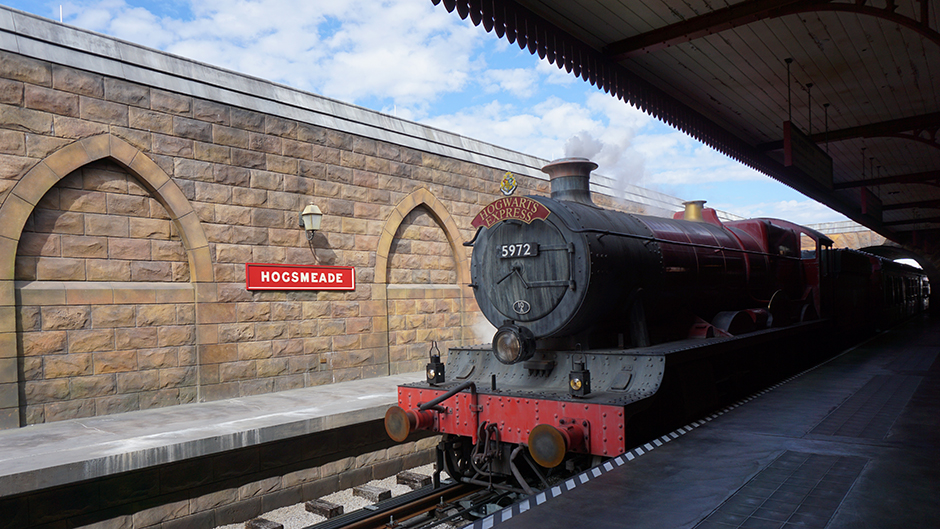 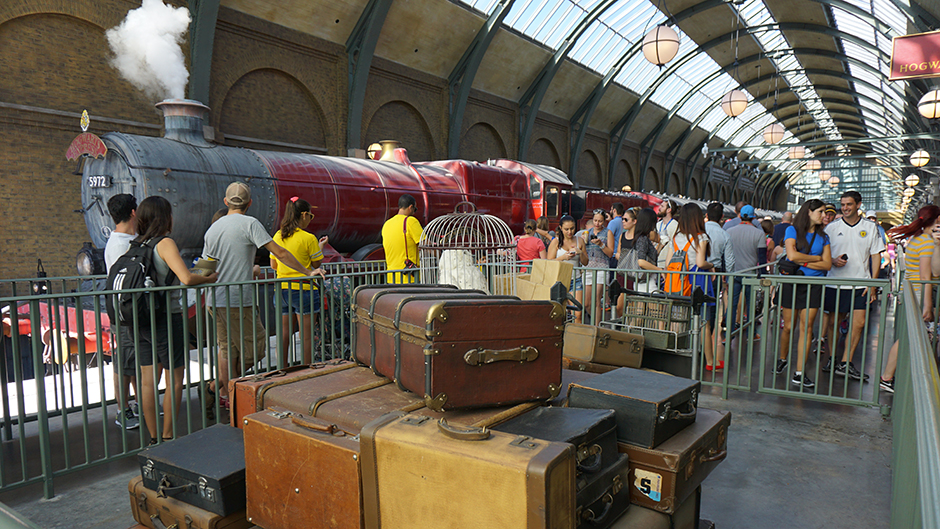 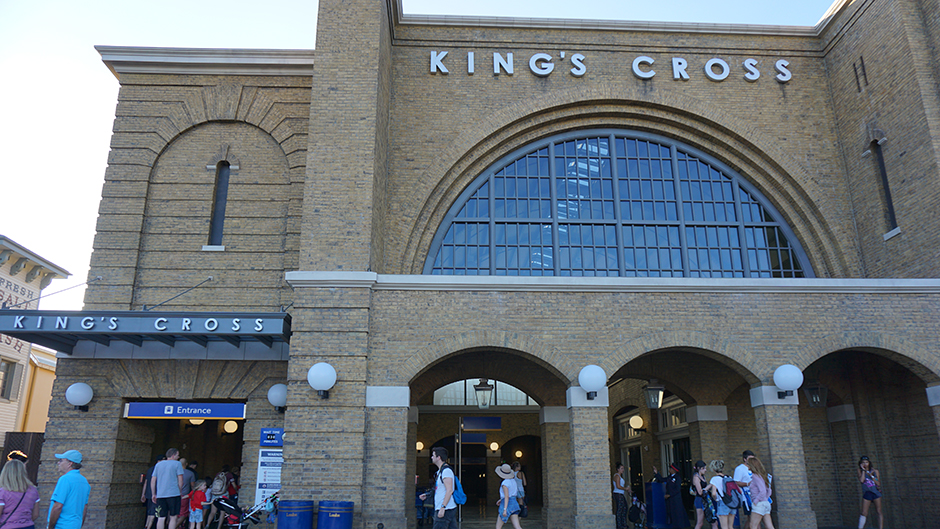 There were a lot of really great special effects in Hogsmeade & Diagon Alley.  You’re always entertained, even on the Hogwarts Express. 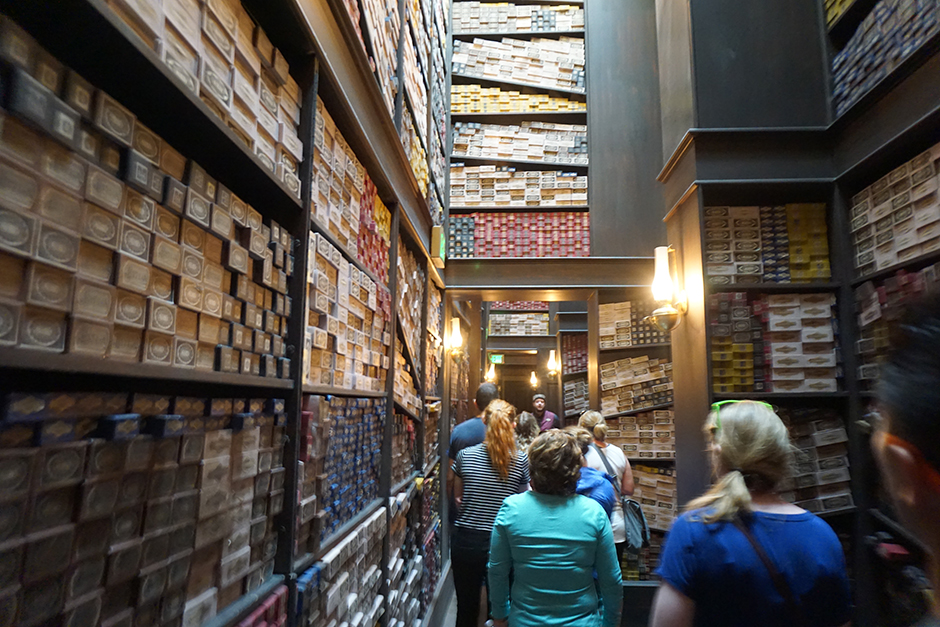 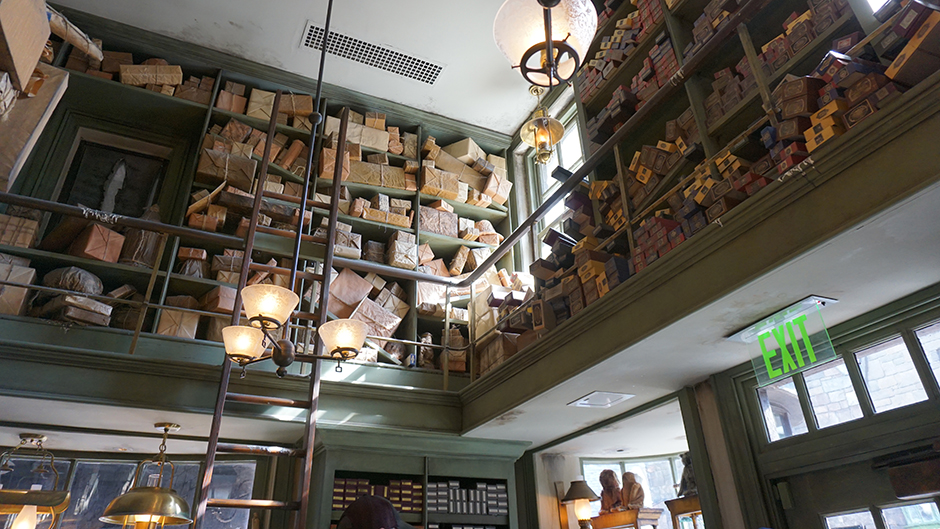 Visitors (or Muggles) could purchase a wand at most stores and stands here, but I would say the best place to go is Olivanders wand store in Diagon Alley. I mean, that’s where Harry Potter bought his, so why wouldn’t you? I ended up watching a few people wave their $50 magical wands over special hidden spots to activate special effects. 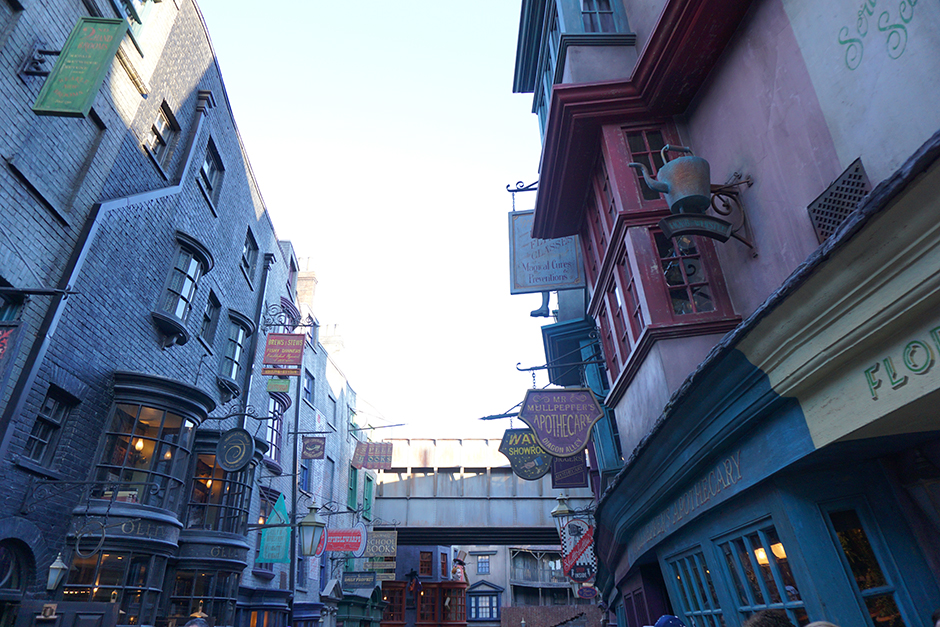 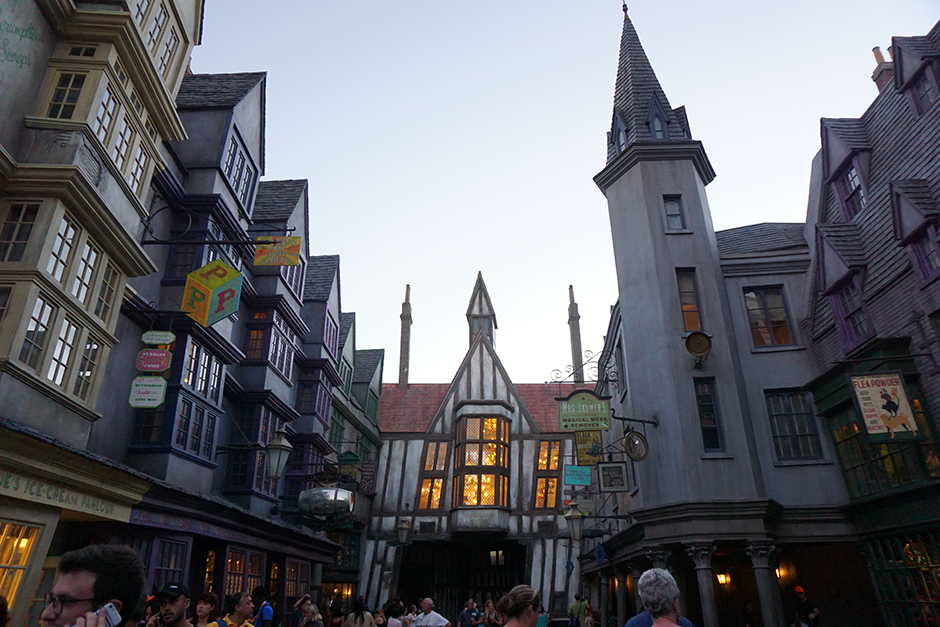 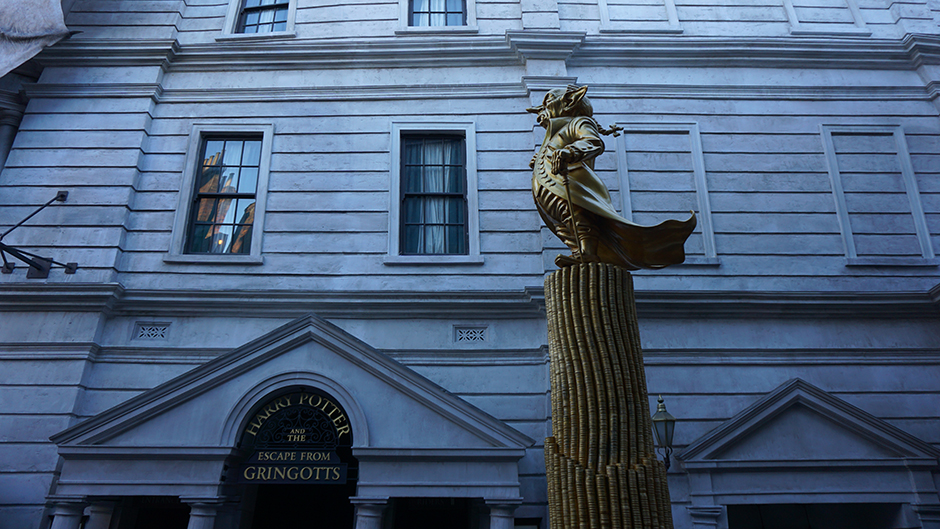 Tom and I headed over to check out the ride at Gringotts Bank.  It was designed so beautifully that even when we were in line waiting we were captivated by all the special effects of the moving goblins, the replicated interior architecture from those famous movie scenes, newspapers with faces that moved, art work with faces that spoke and moved, and well, the list just goes on!

When we walked around Universal Studios, we came across a really cool Transformer that you could take pictures with.  It was exactly like the ones in the movies. It spoke to everyone and posed for pictures.  I couldn’t even believe how real that was.  Nothing was as good as the Harry Potter wizards and Transformers.

Here’s the important part:  When Tom and I went, we booked accommodations and park passes separately.  We stayed at an AirBNB, but booking the passes with hotel together as a package is actually more affordable.  If you have a car, you can actually get a hotel and park packages on the Universal Studios website. You can actually get 3-4 day passes at Costco.com for less here. There are also airlines that offer packages. Check  Jet Blue here, South West here and try other websites to find the best price.

For those going to Universal Studios, temporary use of the free lockers are unlocked with your fingerprint and are available for use when you go on rides.

With the exception of the children’s area, we covered almost all of the park. We ended our 3-Day adventure with a beautiful Light show on the water and dinner at the Universal Studios City Walk.  There was live music, the weather was really nice and we got to enjoy a drink on the patio. It all feels like a wonderful dream.  I could honestly say, I happily indulge in butter beer and a scoop each of Floreans Forticue’s chili chocolate and earl grey lavender ice cream again in a heartbeat.

Photo credit to my one and only, Rise Again BJJ

Champagne Brunch at The Mission Inn

The Main Reason Why Any Woman Should Dress Up